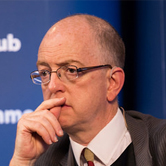 George Marshall co-founded COIN in 2004 with Richard Sexton, and he is currently Director of Projects. George has 25 years of experience working across the environmental spectrum – from community level protest groups to senior positions in Greenpeace and the Rainforest Foundation to consultancy work for governments and businesses. He is an expert advisor to the Welsh Government on public communications.

George writes widely on climate change issues including articles for The New Statesman, The Guardian, New Scientist and The Ecologist and is the creator of the blogsite www.climatedenial.org which examines our psychological responses to climate change.

George has written two books: Carbon Detox (Hamlyn Gaia) in 2010 addressed personal behavior, and in 2014 Don’t Even Think About It: Why Our Brains Are Wired To Ignore Climate Change (Bloomsbury US) written for a general public audience on the psychology of climate change