Lament for a Giant’s Sigh

A reverie of nightwalking 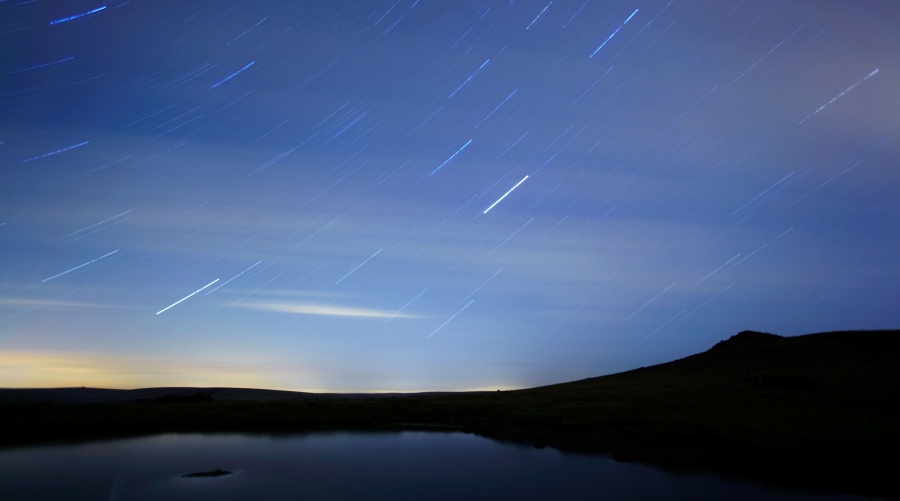 In 2008, as part of my dramatherapy training, I found myself walking in silence at night across Dartmoor. We were given instructions to have a buddy and carry a torch. We were told that one staff member would go at the pace of the fastest, and that another leader would go at the pace of the slowest, and others would walk between us. We had already surrendered our phones, and we were asked not to use words to communicate. We walked in rare darkness, free of light pollution, along the country roads with their dry-stone walls, banked hedges, high roots, upward through the sparse woodland that leads to the exposed treeless moors themselves. We walked for a short while on the moor itself, and then back down again onto safer and more inhabited parts of that place.

It was an invitation to go within and without at the same time, through the simple act of walking, into a semi wild environment, in a group, and yet alone. The subtle arrangement of these conditions allowed for a mood of deep reflection; of safety, yet challenge. The act of walking and the suppression of words encouraged reverie, that state of being where images, memories and feelings flow unbidden before one’s mind as in a dream, yet awake. Yet the darkness and the tangible presence of root and path made the environment vivid and real, each step to be taken with care. Each step was a step taken simultaneously into oneself and into nature, memories, images and reflections mingled with the flash of torchlight and the darkened outlines of trees and hills.

It is no accident that walking as a leisure activity coincides with the birth of the Romantic movement, suggests Patrick Harpur. A society bound to the land could not romanticize walking, or, perhaps be so able to view nature as sacred in quite the way we do today. It takes a level of alienation from the land to be able to turn around and see it anew, as something beautiful and exotic. Certainly, this alienation from direct experience of nature has happened, and what we find sacred in nature rests, in part, upon this alienation. It is a yearning for a return to something half-known, half-imagined when we look back at the valleys, paths and woodlands we have just walked, like Wordworth’s nodding daffodils. Such a romantic vision of nature still reflects something of ourselves, that shadow we cannot get rid of, but wish to shake off, wish to not see.

In the attempt to formulate more-than-human ethics, lies the danger of an unthinking misanthropy, where we project purity onto nature, and cast ourselves as the devil, the disease that must be purged. As I approach nature, as a modern European, I cannot but know that I am part of a community that may destroy it.

Of course, Nature always has the power. We may yearn for a return to a deep communion with the living world, and we may approach nature in order to make peace with it. However, it is quite possible that the indigenous people who know and venerate the Earth approach nature not to make peace with it, as we need to, but to appease it, as they have needed to. The roles in the relationship to nature are here reversed – if you live in an environment of thick trees and vines that towers over you, where death may strike suddenly in the form of disease, or jaguar or anaconda, and you have no access to chainsaws let alone metal tools to clear your sight lines, your approach is likely to be one of bargaining and appeasement. ‘Nature’ seems to have the power.

The true psychopathology of our time, argued James Hillman, is not so much Narcissism – the endless staring at the self in our digital mirrors – but Titanism – the human self as limitless – greater than and above its environment. Narcissism we see clearly, but Titanism, despite it’s great size, seems harder to spot. It is embedded in our experience of life, and how we approach technology, industry, illness and work. The towering trees of the Amazon, or the Great Woods that once forested large parts of England, no longer threaten us. Rather, we unconsciously assume a position of the giant in relation to nature, whilst our gigantic technology, which seems the site of our greatest intelligence and achievement, ironically makes us stupid, brutal and unconscious. The engine of a car is now plugged in to a computer rather than taken apart and understood. GPS seems to render a compass a romantic indulgence. Something seems missing, something basic, yet hard to see.

The small bird in the giant’s

Small bird
Hops and flutters
In the branches of the
Winter tree.

Giant men with
Tar blackened hand
Crash around
With nets and cages
To thieve her feathers,
Capture her song.

Her song’s like a life –
Gone in a moment,
Sun on green feathers,
And a dead tree that lives.

Her sudden, swift colors
Threatened by giant tarred hands
That want to squeeze
The Sun from her feathers,
To spill on the leaves.

The Giant is blindly drawn to the bird – to its beauty – to capture and extract the Sun from her body. As with any metaphor, it’s meaning, much like the night walk on the moor, points two ways. It points outwards to the soul of modern Titanism and inward to our own desire to capture and own what is beautiful.

However, appeasing nature may actually be a more congruent action to take than making peace with it! It is our ‘selves’ we will destroy through climate damage, polluted oxygen, downstream floods, harsh storms, sudden soil erosion. And yet, these ‘little’ individual selves are meshed into a much larger reality.

We destroy the biodiversity that connects tap water with the sea, the sea to the salmon, the salmon to the upstream soil they die in after spawning, the teeming microbe soil that swallows their bodies to the great trees the soil feeds that pump water back into the skies. What is threatened by climate change is everything we know to be alive. Our Titanism obscures the dimensions of this ecological self. Even a Titan is small within the dimensions of the Earth and the Cosmos.

The reality of beauty

There is a level of despair at this point of realization – not so much at the gigantic destructiveness of human nature, but at the possibility of never making a mark on the world at all, in the greater scheme of things. This is a moment that invites us to muster stoicism and courage in the face of the cold winds of existential reality. And yet, this is still a vision of the world where meaning lies only within the province of human experience.

romanticizm takes a different path to confront this existential challenge: by forging a link between the inner and outer through the liminal spaces of imagination. James Hillman and Henri Corbin, challenge the idea that imagination may be flimsy or unreal. It is, they say, the ‘Imaginal Realm’, one that invites a mature vision of the imagination, not one limited to individual expression, but one opening a doorway to a personal relationship with the numinous.

In this view, the patterns of our lives and the great events in the world have an underlying mythic, archetypal quality, that and connects the mundane to the gods. This, in turn, regards the Imaginal as a gateway to Nature, where material reality re-unites with the numinous and the beautiful. This way of re-visioning Nature as the Imaginal allows us to participate within it, to become it.

When this happens, Hillman says, “It becomes more and more difficult to make the cut between psyche and world, subject and object, in here and out there. I can no longer be sure whether the psyche is in me or whether I am in the psyche as I am in my dreams, as I am in the moods of the landscapes and the city streets, as I am in ‘music heard so deeply / That is not heard at all, but you are the music / While the music lasts’ (T,S.Eliot)”.

Paratheater and the soul’s yearning

My walk across Dartmoor was a piece of paratheater. Paratheater was a a form of immersive experience, based on ritual theater and encounter. It was devised by Jerzy Grotowski in Poland during the 1960’s and 70’s. It makes use of the powerful processes that seek to completely break down the ‘fourth wall’. In its place emerges a creative communion between participants – a deep encounter, where participants are ‘disarmed’ from their everyday defenses, by the flow of creative acts of movement and voicework.

In Grotowski’s original work, a space was set aside from the everyday – a holiday, or ‘holy day’ – in which people could discover deeper creative impulses. These startling events, took place in pastoral, remote or wooded parts of Poland, and attracted a great deal of people, many of them, changed for life by the experience. Nature is a key within paratheater to unlock depth. It makes real the idea that creative impulses have oerganic roots in the body. Creativity becomes a discovery of the self’s deep contact with its environment, something that needs to be unblocked from the body rather than invented by the mind, as Kumiega discovers, in her report of her paratheatrical experiences:

“July 24 1977, 6:00pm
We follow moist paths through the woods
We are skittish – soon sensitized to the communal presence, a move from any direction
bringing a ripple of response.
Already there is a testing : of each against the other against any interference of a
structure, against those who know the way.
Even finally against the way: against the
multiple shades of green and all it’s textures,
against another acceptance of the horizon.
Until we come up against ourselves,
Our bodies.”
(Jennifer Kumiega in Schechner and Wolford ed. 1997)

Paratheater is a path rarely trodden, one in which the creative potential of a person, understood as a form of encounter, is connected to the organic impulses that arise from the same source that govern the patterns of nature. It was as if what Grotowski was aiming for was the human equivalent of a murmuration of starlings – something deep within the human soul that could be discovered and made anew. Paratheater was later adapted by Steve Mitchell into therapeutic structures within dramatherapy, for work with vulnerable populations, or be used for self-development.

My silent walk across the moor was the start of a weekend of paratheater and the beginnings of a new awareness: that it is not enough to dispassionately regard nature. Rather, within the body’s deeper convergence with the reality of nature that we share, vision itself may be transformed. Here in this work and in my walk, I found an answer to the misanthropy that casts a blighted shadow over environmentalism.

I heard someone whisper: “Look deeper. There is a shared source that links creativity and creation. It is in your body as much as in the trees.”